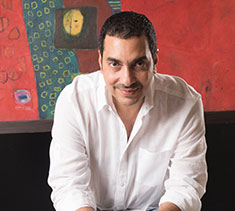 (1970, Muharraq), painter. He studied art at the local well-known artists in the Bahraini Society of Arts, of which member he became in the year 1990. His art work creation includes spiritual features of different cultures. In his earlier creation were human figures the main object, later on he concentrated all his energy on combination of figurative and abstract art works. He won several prizes and he has become a premier member of the World Wide Arts Resources. He had some individual exhibitions in Bahrain and in Canada.