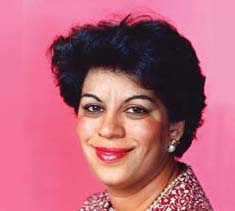 (1952, Kuwait), painter. Since 1981 she has academic degree in graphic illustrations of books and design on Surik Art Academy in Moscow. She is a member of Formative Arts Group and Very Special Arts Organization in Washington. In 2001 she received Prize for creative activity from The European Art Union in Prague and The European Franz Kafka Medal in Berlin. She was awarded by the Salvador Dalí World Prize in Bratislava during her own exhibiton in 2003.